Old Colorado City: 18 Fun Things to Do in this Charming Small Town

Colorado was built on the back of the gold rush and mining days. And nothing epitomizes the wild west like the charming town of Old Colorado City!

Unlike other Colorado destinations, historic Old Colorado City (aka OCC), is a suburb nestled inside of another bigger city.

As locals, we’re sharing our favorite activities and spots to check out. From charming shops to cute candy stores and yummy restaurants, there are tons of things to do in Old Colorado City.

Continue reading to learn more, or simply listen to our podcast.

Where is Old Colorado City?

It is no longer its own independent city like it was in the early 1900s.

Old Colorado City is super easy to find: whether you’re coming from Denver to the north or Pueblo to the south, take I-25 to Cimmaron Street or Highway 24 (same street, different names).

Just head toward the mountains.

The History of Colorado City

Old Colorado City was listed in the National Register of Historic Places in 1982, but its history is much older than that.

Before it was “old,” Colorado City was established in 1859 during the Pikes Peak Gold Rush.

Miners would buy supplies in town then head up the Ute Pass to mine for gold.

It had a bit of a seedy reputation back then. This was due to the high number of saloons and “entertainment” that often follows large groups of miners.

Colorado City became the Capital of Colorado Territory before it was moved to Denver (where it remains today now that Colorado is a state).

Apparently, legislators who visited the state’s capital for meetings had no place to stay the night in Colorado City, and would have to camp out.

Despite being legislators in the wild west state of Colorado, they swiftly voted to move the capital to Denver instead (where they could get a hotel). Ha! 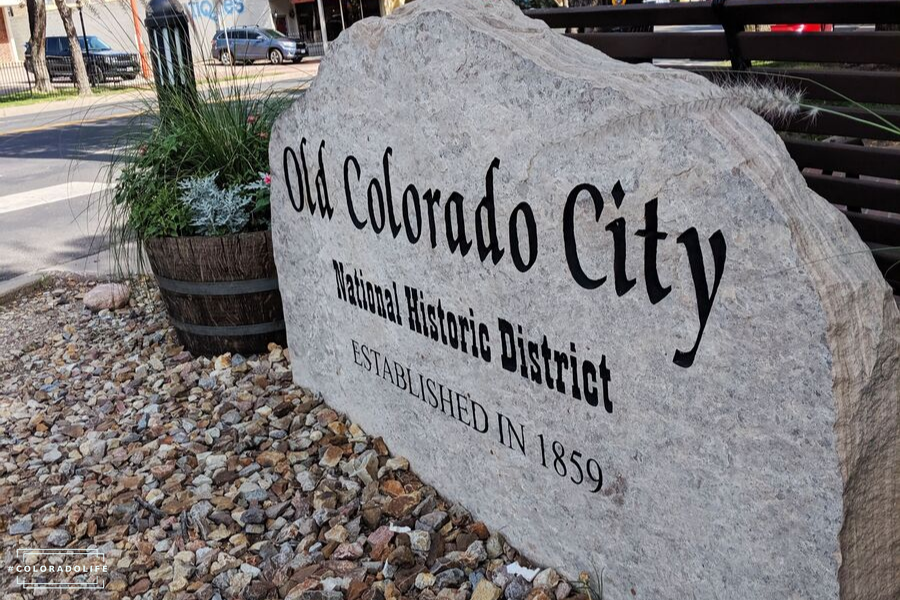 Colorado City was also the county seat of El Paso County until 1873, when the seat was moved to Colorado Springs where the wealthier people wanted to build their homes.

Because of this, Colorado City was very much a wild west town (a vibe it still has today).

Colorado City also remained an independent city until the early 1900s. The city’s economy was still fueled largely by the mining of gold and silver in the Ute valley, as well as bars and brothels.

When a state-wide prohibition was instituted in Colorado in 1913 (expressly to combat the unsavory culture that was growing in Colorado City), it hit the community’s economy very hard.

That’s why residents voted to become a neighborhood of Colorado Springs in 1917, and “Old” Colorado City was born!

In the early 1980s, the community began restoring the city to revitalize their downtown. This is when they registered as a historic place and a place that’s great for tourists.

Listed below are some of the most popular things to do in Old Colorado City from shopping to dining, enjoying local art, and other treasures.

What is the vibe of Old Colorado City?

When you visit, you might notice that OCC feels like uptown. Due to its history and all the efforts to revitalize the neighborhood, it has a great vibe.

Throughout Old Colorado City are old stone buildings with tons of character, narrower streets, and big trees that have stood the test of time.

The surrounding neighborhood stands in very stark contrast — while everywhere else has become modern, OCC holds on to its turn-of-the-century look.

Set on a basic grid pattern, it’s super easy to navigate in Old Colorado City. You will find almost everything you want to find somewhere along Colorado Avenue.

(But don’t be afraid to dive off the main drag, too! There are plenty of kitchy shops further off the beaten path.) 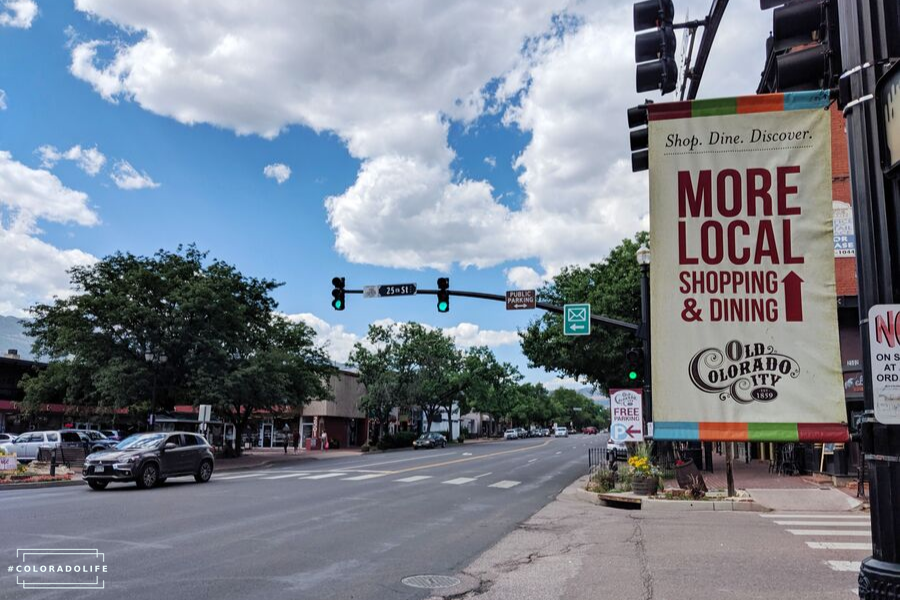 Anyone who grew up in Colorado will have fond memories of Territory Days!

In Old Colorado City every Memorial Day weekend, the community hosts live music, a kids’ petting zoo, and over 180 food and craft vendors.

You will also find blacksmith demonstrations and gun-slinging reenactments!

Please note: The 2021 Event has been canceled due to the pandemic.

Want to step back in time with some yummy food and drinks? Check out the historic Thunder and Buttons II bar on Colorado Ave.

The bar got the name from the local lore about Prairie Dog O’Bryne (yep, that’s what they called him!). He hitched up two bull elk to his carriage and rode around in Old Colorado City.

A bar was created in his honor in 1978 and sadly burnt down ten years later. Thunder and Buttons II restored the legend in 2004 and remains open today!

Old Colorado City has really revitalized the downtown area, and has become a very popular destination for shopping, eating, and socializing.

Walking down the main street offers a fun mix of antique shops, cafes, and off-beat mom and pop shops, all within a close walking distance. 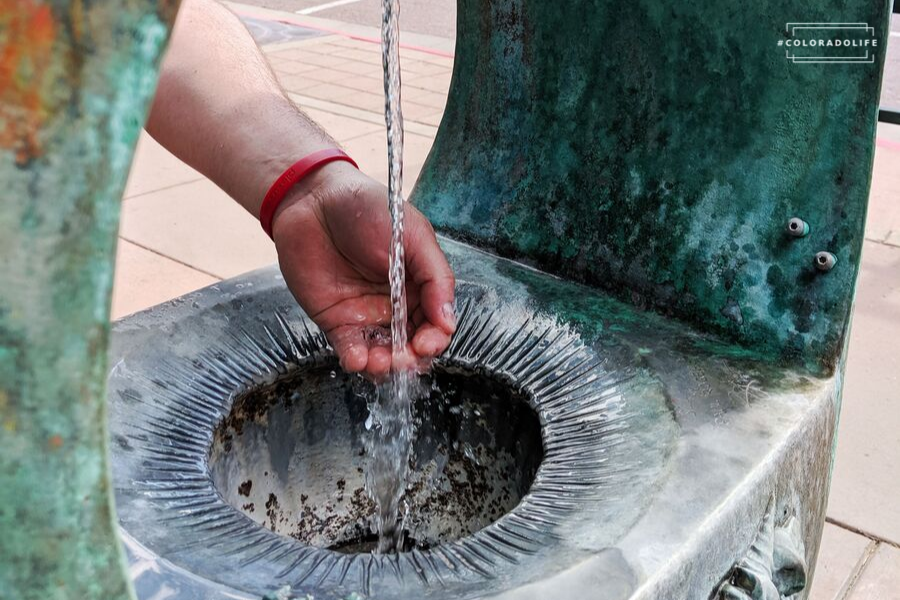 If you’re visiting Old Colorado City, you’re a short drive away from the area of Manitou Springs and the Cliff Dwellings Museum.

In fact, Old Colorado City is on the way to Manitou Springs, so it’s a quick ride up the highway to see some more of our favorite sights.

5. Garden of the Gods 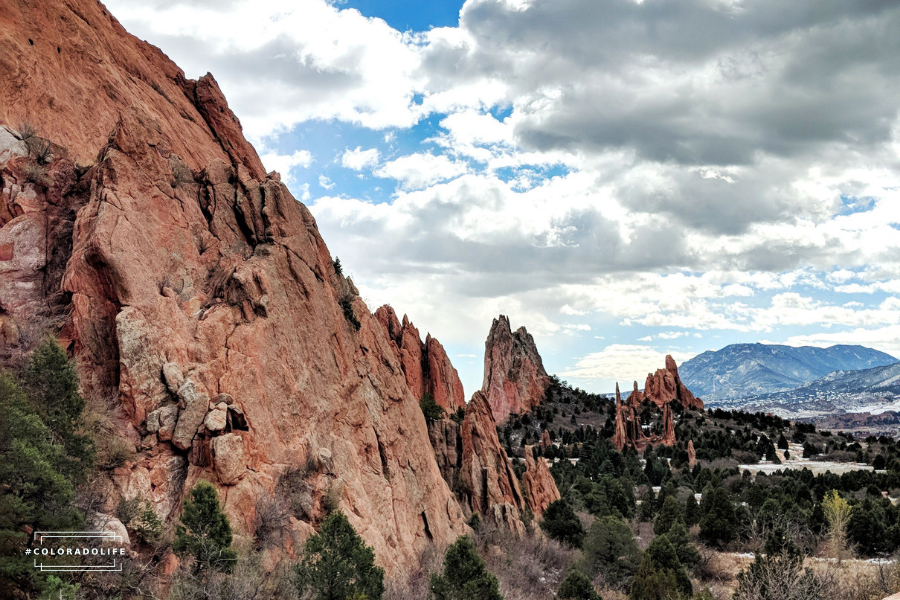 Another one of our favorite stops, just outside of Old Colorado City proper, is Garden of the Gods Park.

A registered National Natural Landmark, the Garden of the Gods is nestled at the base of Pikes Peak.

And the destination offers plenty of fun things to do! From Jeep rides and bike rentals to the museum’s Visitor and Nature Center, there’s something for everyone to enjoy in this beautiful park!

You can also just drive through the one-way road through the park and take in the sights without ever leaving your vehicle.

From June through October, you can’t miss the Old Colorado City Farmers Markets! The OCC farmers market has been open for more than 20 years.

You can visit between 7am-1pm in Bancroft Park every Saturday during these months. With 24 full-time vendors and many more temporary booths.

You’ll find a great mix of local options like corn, squash, cantaloupe, honey, cheese, bread, and fresh herbs. Come back week after week and build a relationship with your favorite farmers! 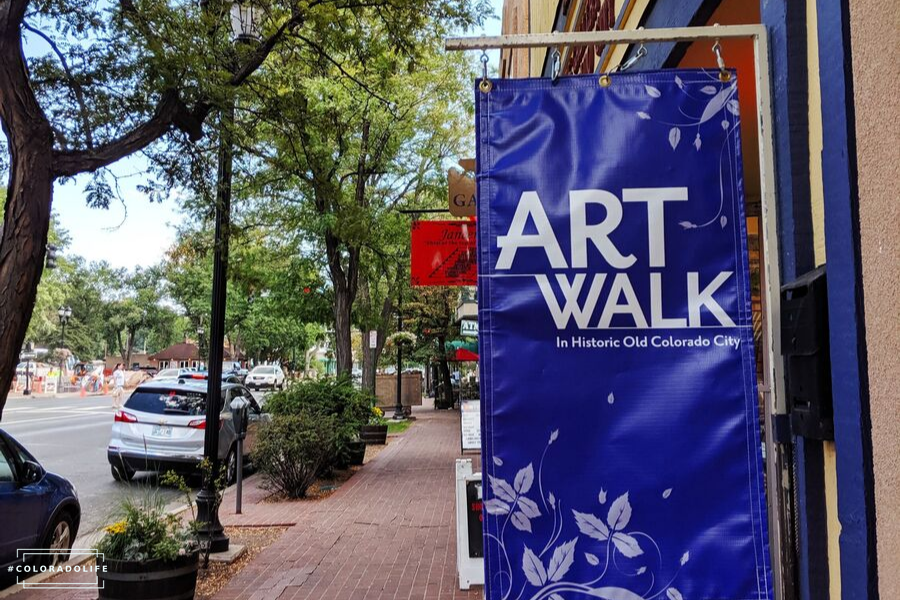 Every first Friday from April through December, walk down Colorado Ave for the Artwalks in Old Colorado City!

The event is free to attend and you’ll find plenty to see (and buy, if you’re looking!). Food and craft vendors are also available. 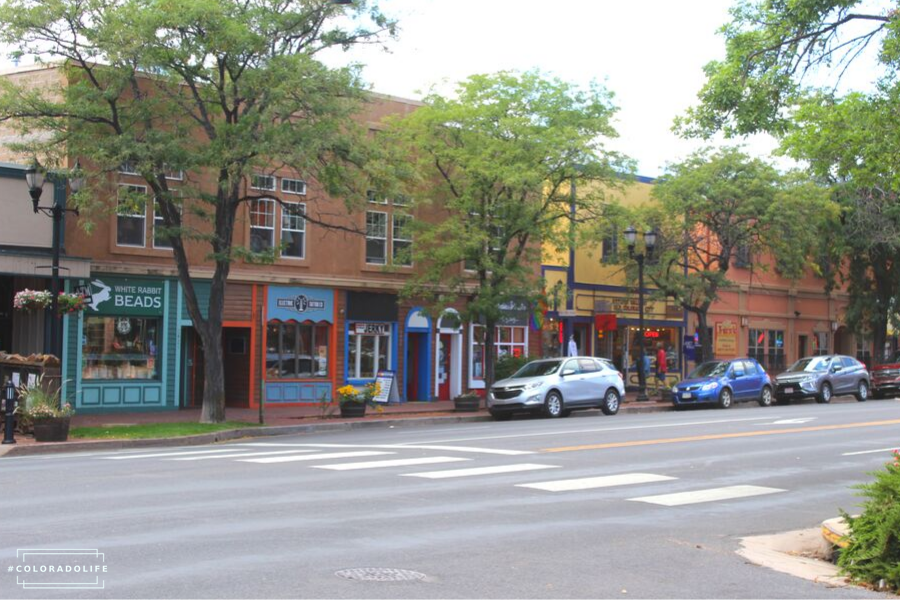 In the fall, there’s nothing more fun than a good ghost story! Stop by the Old Colorado City Historical Society.

You’ll learn about many spooky things that happened in OCC way back when, including the underground tunnels where townspeople once traveled beneath the streets!

Old Colorado City is located right at the base of the mountains, and the feeling of fall is in the air in September and October.

That’s why we love attending the Fall Harvest Festival in this quirky Colorado town!

It’s a family friendly event from 11am to 3pm, including a pumpkin patch, kids zone, face painting and pumpkin decorating, as well as a beer garden, food vendors, and sidewalk sales too!

Looking for more events in Old Colorado City? Check out their events calendar for the latest on all things OCC. 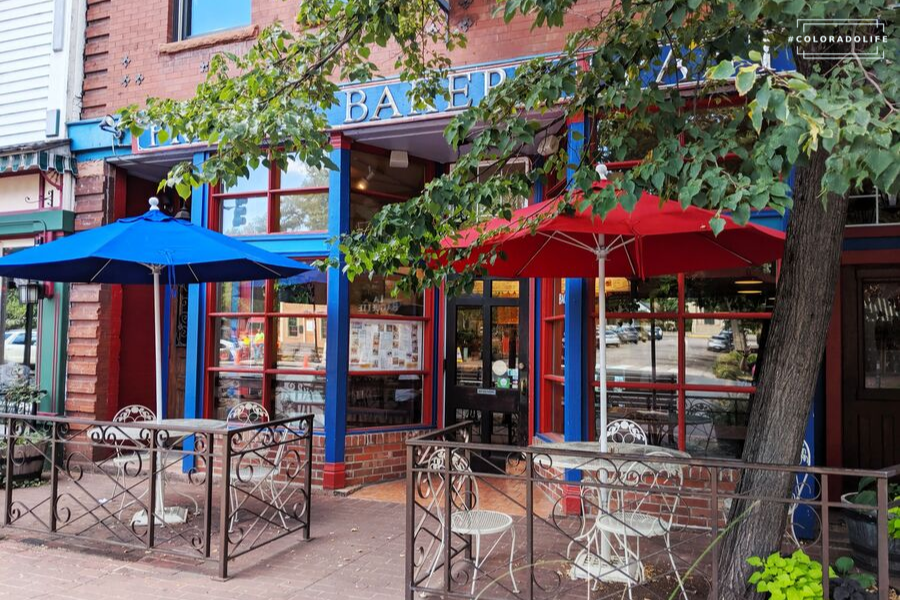 In Old Colorado City, you will find lots of unique restaurants featuring flavors from around the world. In fact, many of our favorites listed here come from many regions of Europe.

We love La Baguette! Open daily, La Baguette has been in business for nearly 30 years.

Paravicini’s offers the city’s best Italian, and we have to agree! They have won many awards since it opened in 2003.

And it has even been featured on The Food Network’s Diners, Drive-Ins, and Dives.

In addition to the incredible food, Paravicini’s also has an awesome patio space where you can enjoy the ambiance of nearby Pikes Peak while you dine.

We also like Alchemy Pub, which describes itself as an Irish influenced gastropub.

Offering an array of craft microbrews on tap, a seasonally rotated menu, and a handcrafted specialty drink menu.

You’ll find a lot to enjoy at Alchemy! It is a bit of a hipster place, but it has a great atmosphere and a nice patio for those late summer, early fall days. 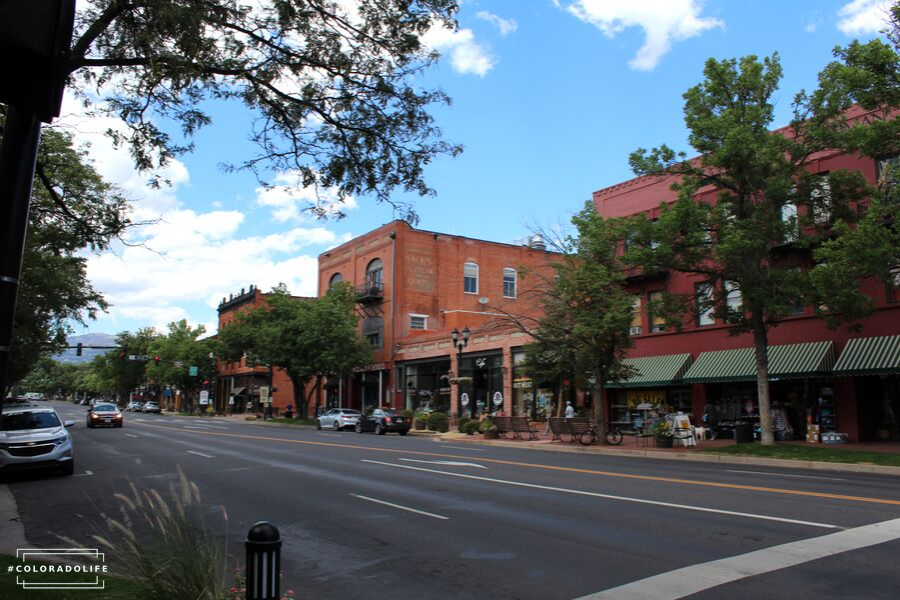 In case you haven’t gotten your fill of delicious European breads, you must stop into Wimberger’s Old World Bakery and Delicatessen.

Wimberger’s has served up bread, pretzels, and meats and cheeses from the delicatessen since the 1970s. It is worth the detour off of Colorado Ave to stop in.

14. The British Pantry and Tea Room

After a day of walking and shopping, you’ll need no excuse to stop into The British Pantry and Tea Room for some afternoon tea.

Tempt yourself with a selection of teas and finger sandwiches at High Tea. Or shop for English, Welsh, Scottish, and Irish gifts, groceries, and other goodies in the gift shop.

It’s owned and operated by an expat from Surrey, England. 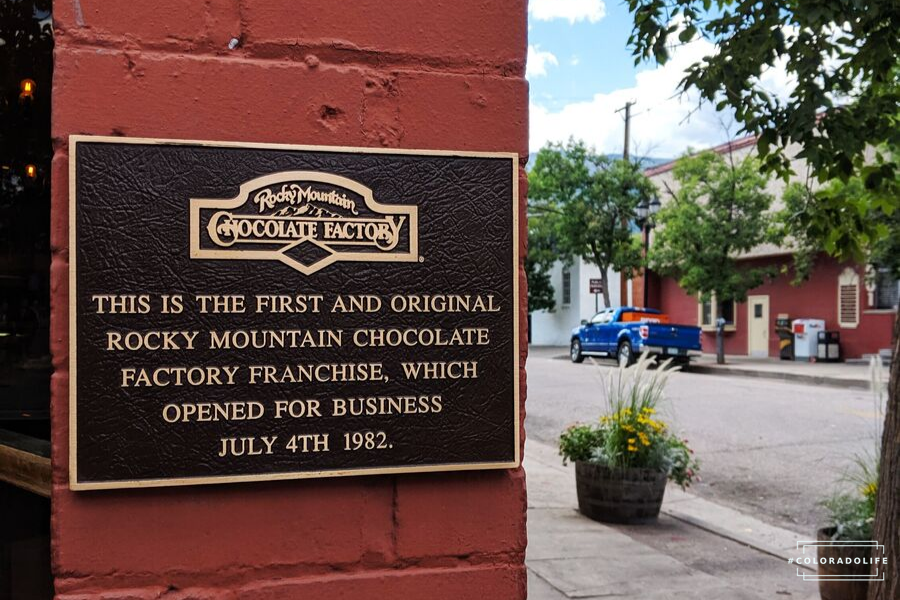 You’ll find plenty of places to shop when you cruise down Colorado Avenue, but in case you need a recommendation in the sweets department, we have you covered!

A Colorado-based company and staple of nearly every kid’s agenda in OCC is the Rocky Mountain Chocolate Factory!

You’ll find the shop on the corner of Colorado Avenue and S 25th Street, just down the block from La Baguette. 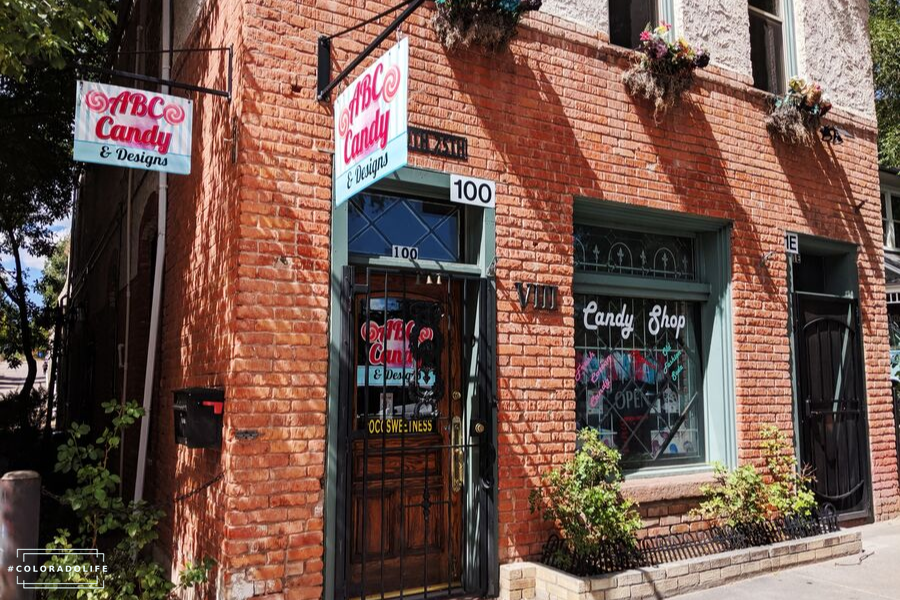 For that quintessential candy store experience, you’ve got to check out ABC Candy and Designs. Feel like a kid and grab a bag — candy is sold by weight.

Get old-fashioned favorites, new candies, cotton candy, even candy baskets and candy grams! Host a party here and have a candy buffet.

Looking for free things to while in Old Colorado City? There are plenty of ways to enjoy this historic town without spending a dime.

The Old Colorado Historic Center is a great place to visit for free any time of year.

The history center is dedicated to the preservation of Old Colorado City.

It is home to a research library containing artifacts, photographs, and the written, oral, and electronic history of OCC.

A fun way to get to know the rich history of Old Colorado City is with the Walking Tour app!

Download for free on iOS or Android, and dive deeper into the stories and sensations that helped to create this incredible neighborhood.

There’s so much to see and do in Old Colorado City, and you’ll feel like you’re stepping back in time as you walk down the streets.

We hope you enjoy the exploration of this historic neighborhood of Colorado Springs.