The Story of Blucifer: Denver’s Spooky and Deadly Horse

Today’s topic is a little spooky and scary because we are talking about Blucifer: Denver’s spooky and demonic horse.

This giant blue horse statue is what you see when driving in and out of the Denver International Airport.

It has a creepy vibe with a demonic stance and glowing red eyes, not to mention the chilling history behind it.

Read on as we share about the history of Blucifer and the story of how it came to be one of the creepiest icons in Colorado.

Or listen to us chat about Denver’s deadly horse on our podcast.

Blucifer is actually a nickname that locals use for “Blue Mustang,” a large fiberglass artistic sculpture of a mustang.

Blue Mustang is located at the Denver International Airport in the median of Peña Boulevard.

It is originally based on an 8 foot tall sculpture called Mesteño, which is Spanish for mustang, that is located at University of Oklahoma.

It is bright blue in color with glowing red eyes and very pronounced features across its body.

Blue Mustang is one of the earliest public art commissions for the Denver International Airport. And it was originally commissioned in 1993 while the airport was still being built.

Also, due to its location on the plains Blucifer was built tough in order to withstand nearly any type of weather.

Blucifer has to endure extreme weather of hail, rain and particularly high winds that come with Colorado’s weather conditions. And has been insured for $2 million. 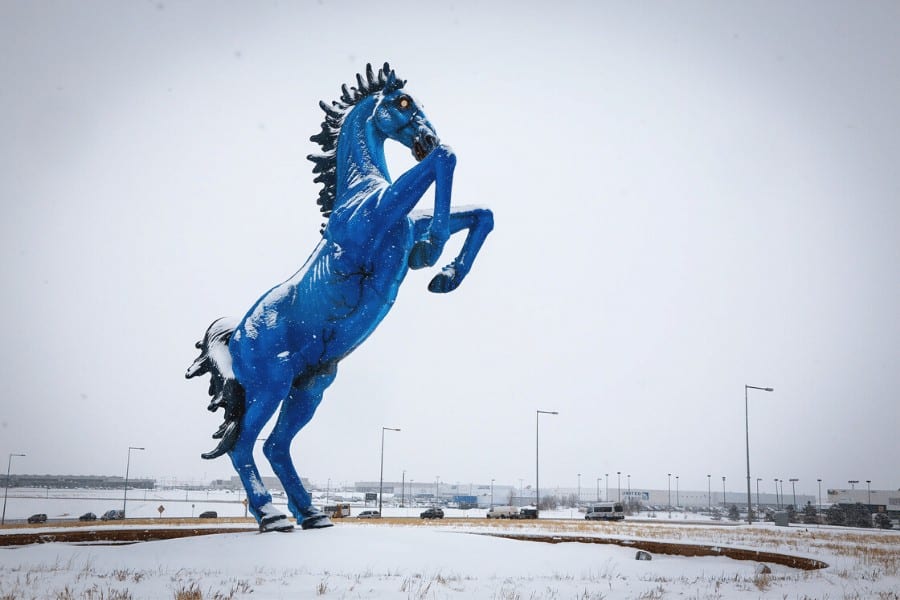 What is the history of Blucifer?

The history of Blucifer is quite ominous as it wasn’t actually installed until 2008 — about 15 years later than it was commissioned.

The main reason for the delay is because the statue killed its creator, Luis Jiménez at age 65.

Luis was the sculptor who was hired to do the job and was actually killed in 2006 when the head of the horse fell on him, severing an artery in his leg.

Other delays along the way included legal battles while Luis was alive. He repeatedly missed deadlines and the city of Denver filed a lawsuit against him to get the money back.

Nothing came of the lawsuit, however, and the city of Denver eventually paid $650,000 for the sculpture.

After Luis’ death, Blucifer was later completed by the artist’s staff, family and other professional painters.

Then upon completion, the statue was sent to California to be assembled and shipped to Denver.

To this day, Blucifer is a controversial piece — which is what makes it art.

It gets a lot of publicity as there have been many campaigns to remove the sculpture and it was even vandalized in 2019. 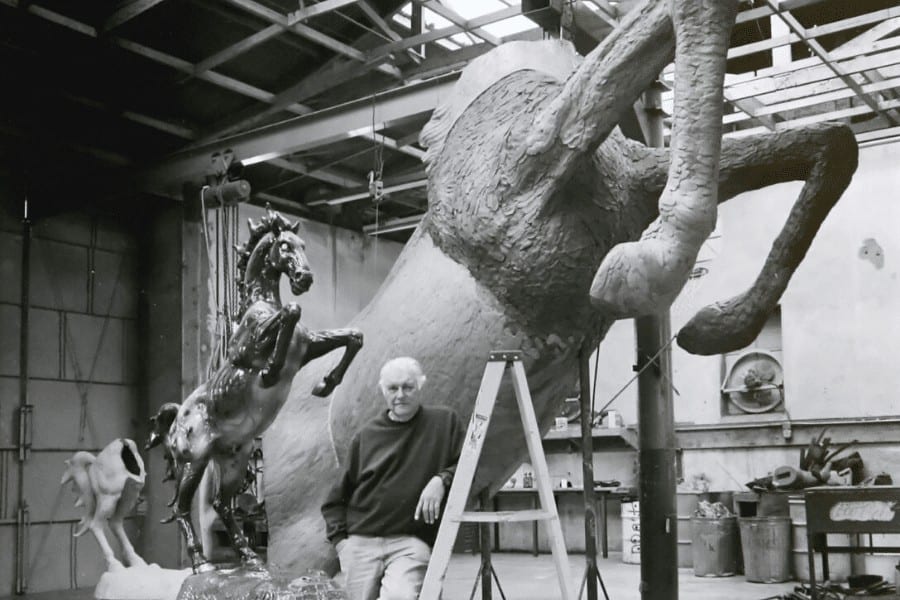 What does Blucifer mean?

As mentioned, Blue Mustang is the original name for this sculpture, but it is most well-known for being called Blucifer.

Blucifer is a nickname that was given by the locals due to the demonic look and deadly history of the statue.

The artist wanted the sculpture to capture the spirit of the wild west in America, representing freedom and boldness to anyone who saw it.

The red eyes are a nod to the neon workshop that his father owned where Luis apprenticed in his youth. The glowing eyes are a homage to him.

Why is Blucifer colored blue?

In early sketches of the sculpture, the mustang was colored yellow and even pink.

No one really knows for sure why the sculpture is painted blue, but there are several theories.

One theory is that blue was chosen as the color because Luis had a horse named Black Jack who happened to be a blue Appaloosa.

Another story is that the color comes from a legend surrounding the San Luis Valley where wild mustangs roamed and one of them had a blue coat, red eyes, and was capable of flying.

Many people also think that the statue is blue as a nod to the Denver Broncos football team. In fact, it has been proposed over and over to repaint the statue orange and blue for that exact reason. 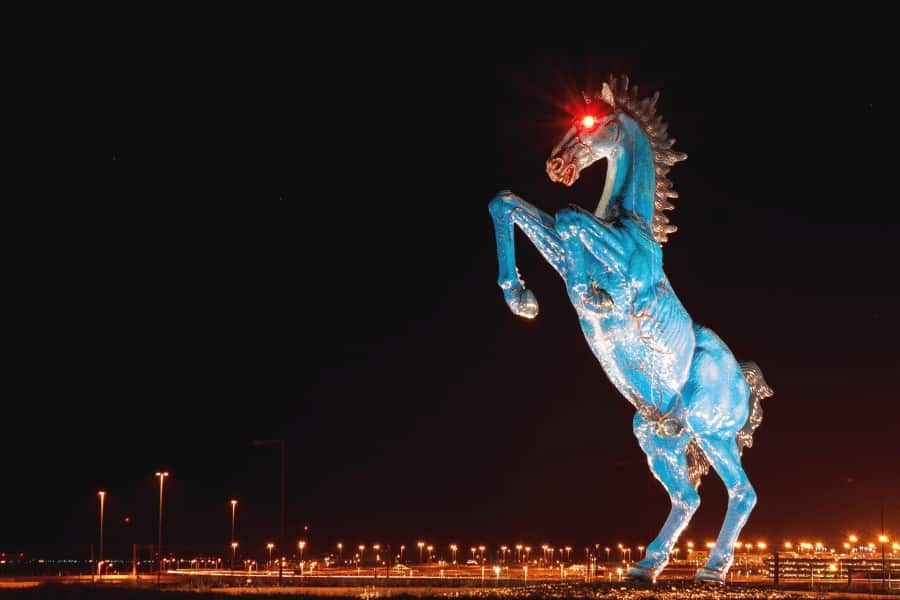 What is the difference between a mustang and a bronco?

The difference between a mustang and a bronco is slight but significant.

A Mustang is a horse from the original Spanish in the 16th century conquest that has somehow become free and feral.

While a Bronco is a horse that has not been broken or tamed.

In simple English a mustang is a free horse while a Bronco is a rebellious horse.

Why is Blucifer so creepy?

As mentioned, Blucifer has a very aggressive stance. The horse is rearing up on his two back legs, with eyes that glow red all hours of the day.

He also has numerous veins and very pronounced features all over his body.

If the eyes didn’t glow, maybe he wouldn’t look as deadly. But because the eyes do glow, red in particular, it makes Blucifer extra scary looking.

Another thing is the ominous history of the legal issues and killing the creator.

Finally, because of the location, the statue is often the last thing that people see when leaving Colorado via the Denver International Airport.

Cause looking at a 32 foot bright blue Dreadsteed with glowing red eyes, raring back on his haunches, is a comforting thing to see when you’re about to board an airplane.

It is a sight you will never forget, that’s for sure! 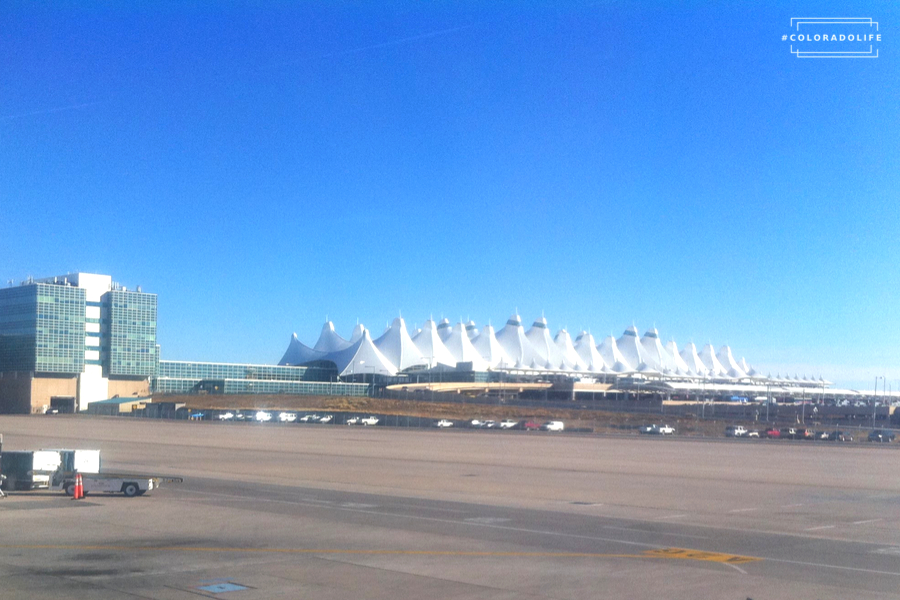 How to get to Blucifer in Denver, Colorado

If you want to see Blucifer for yourself, it’s possible but can be very dangerous.

Blucifer is located in the median on Pena Boulevard just outside the Denver Airport.

He is pretty tough to miss on the drive in or out of the airport so you’ll definitely see him. However, we do not recommend trying to get a closer look at the horse.

There is no nearby parking to see the demon horse, nor are you allowed to park on the road nearby. It’s not a good idea to cross the busy road either, since there is a lot of traffic that never stops.

The parking lots at the airport itself are also surrounded by tall fences topped with barbed wire. So, trying to hop a fence and walk to the sculpture is not advised.

Now you know the origin and history of the Blue Mustang, aka Blucifer.

Denver’s deadly horse cost over $650,000 and is insured for $2 million just to be one of the creepiest and most controversial pieces of art in Colorado.